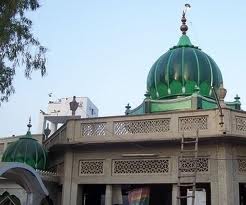 Sharaqpur is known as the home of the Shrine of SAINT MIAN SHER MUHAMMAD, also known as Sher-E-Rabbani & MIAN GHULAM ULLAHknown as Sani SB. Mian Sher Muhammad Sharaqpuri was born in 1282 AH, or 1865 AD, in Sharaqpur. His father's name was Mian Azizuddin. Mian Sher Muhammad was a strict observer and preacher of Quran and the Sunnah. He led a simple life and blessed numerous people. He died on Rabi-ul-Awwal 3, 1347 AH, or August 20, 1928 and his tomb(darbar sharif) is in Sharaqpur sharif.a sweet dish gulab jamn is the most famous dish of sharqpur sharif,
A special kind of shoes called Khusah is manufactured here and is popular throughout the Punjab province. These Khusahs are made by hand; no machines are used in their creation. Nowadays, these are specially designed for bridegrooms at wedding ceremonies. Leather and silver or golden thread are used for their manufacturing. The Khusah is a part of Punjabi culture.
Sharaqpur has a decorated food street, which is the main bazaar of the old city. It extends from Nalkay Wala Chowk to Malkana Gate. It is open around the clock, 24/7. One can find all kind of foods here, including the popular local dessert, gulab jamun.
The area's main crops include rice, wheat, guava, sugar cane, and maize. Cultivated fruits include guavas, watermelon, alichee, strawberries, and falsa. Vegetables include potatoes, peas, onions, tomatoes, cabbage, and radishes, among many others.

Hazrat Mian Sher Muhammad was one of the famous Saints of Punjab who got a reputation in Naqshbandiyyah Series (Silsala). He was born as a saint. He was the living up image of Prophet (PBUH). He spent all his life as a living up image of Prophet (PBUH) and advised his followers the same that in every field of life follow the instructions (Sunhats) of Prophet Muhammad (PBUH).
He was comprehensive in outward and inward-up studies. He was perfect and had no example in tolerance, generosity and worship, as if he was the perfect Qutab al-Qatab and saint of that time. With his blessings many dead hearts were lightened with divine light. Even still now his name is called with respect and devotion.
The Naqshbandy forefathers of Hazrat Mian Sher Muhammad migrated from Kabul to Punjab and lived in Qasoor. Then migrated from Qasoor to Hujra Shah Makeem and then Sharaqpur. The father’s name of Hazrat Mian Sher Muhammad was Mian Aziz Aladdin. His ethnicity was Arian. His family’s professional business was cultivation. Hazrat Mian Sher Muhammad was born in Sharaqpur in 1865 CE (1282 H). After his birth from his body and shining face, the symptoms of as a saint were clear. Everyone who saw him, he was calling without choice that this child is born as saint. Before his birth an elderly blessed person was used to make circles around his house and said I smell a fragrant of a friend from this house. Another elderly blessed pious also used to say that, in very near future, Shere Rabbani will born in this place. Many other pious peoples also predicted about his birth. Many people heard from his contemporary peoples that he was intelligent from his childhood. The divine light was shinning on his forehead.
He read Holy Quran then learnt Arabic and Persian. From childhood Allah blessed him with modesty and shame that when he came out from his house the women of his locality said that this boy blush like girls. His childhood was not like ordinary Childs, neither he was used to sit and play with other children nor he kept any relations with other Childs. He always remained separate and liked separation. Loneliness was his beloved hobby. And he adhere his whole life on it.
His allegiance was on the hand of Hazrat Baba Jee Amir Aladdin in Kotla Panjo Baig.
Once a man arranged bound over (Khaatam) for his dead elder and also called him to participate. But Hazrat said what is benefit from this bound over (Khaatam), the soul of that dead person is not happy from you. The Khaatam will be thrown back on your face. If you wanted to reward the soul of that dead person then leave the selfishness, litigation, lies, betraying, dishonesty, unlawful investment and adopt the virtue and righteous. Live together with peace and mercy. Restrict yourself from eating and thieving the goods of others. And in fact become a good, pure, righteous and decent man. Obey the Allah and his Prophet (PBUH). Offer your prayers, Fasting and Zakat regularly. Avoid abuse, disorder and corruption. These things are thousand times better and excellent than your Khaatam. Go, and act upon my advised if you have wisdom. Otherwise you will destroy yourself and your generation.

Often peoples bring their private disputes, personal matters and property disputes to him, and he brings peace among them with his justice and virtue. Teach them with such good governance that both parties happily leave their illegal demands and become ready to make peace with their brothers.
He was elderly most perfect in follow-up law and orders of Allah and his Prophet (PBUH). So perfect that even on each occasion and all conditions remained happy on Allah and his Prophet (PBUH) consent. Worship the Allah with full humility. Even in religious matters were advanced cautious and methane. His enthusiasm in believing one Allah alone was untied.
When his sons born he kept them in his lap, he said, if after growing you want to become pious, righteous, obedient, worshiper, genial, hospitality, sympathetic with Allah’s creators and obedient with his laws then it’s ok otherwise its thousand times better you go. And after that his sons were died.
The complete details of his routine up from morning till night were as follows:
Often he offered his Eisha prayer late in night, the reason of that was due to late in preparations of dinner for guests who came to him. Even in midnight if some guest came he bring food for him immediately and feed him with great respect and feel proud to serving the guest. Till midnight he remains busy with his friends and followers by doing conversations and audience also enjoy his speak on religious and a social issues. Then went inside home and take rest. He offered his Wittar Rakats with Eisha Prayer, but he always offered his Tahajad Prayer at home and offered very long. In morning wake up at very first time and then went out for Fajar Prayer, that were lead by his uncle Hamed Aladdin. After Fajar Prayer recite the Darood Sharif with audience and give it so latitude that time comes for Ishraq Prayer. After offering Ishraq Prayer teach the Quran to children and finished this job around 11’o clock. Then with most attention manage for guests to eat, which always were a lot in numbers came from far and near to see and visit him. He himself provides water for guests to wash hands before to eat and then brings himself food and put in front of guests. He himself put curry in each guest’s cup. Then eat together with guests. If he found any bread dry or hard put that bread in front of him.
He takes bits very small and eats them very slowly and before every bite recites بسم اللہ الرحمان الرحیم He eat food slowly so that everybody could eat properly, and guests would not feel that he left the food before them. After eating he prays together with all peoples. Remember he always advised to eat by rising right knee.
After that he lays down on ground for some rest and time for Zuhur Prayer comes. He always offered his Zuhur Prayer in very first time. After prayer he met with love of new comers and does conversation with them. Before Asar Prayer’s 4 Farz he always offered 4 Sunnah. After offering prayer he becomes busy for preaching. When time comes for Maghreb Payer he does Wudu and during Wudu didn’t take help for water from anybody. He strongly disliked talking during Wudu. He also combed hair of beard during Wudu and cleaned his teeth with Maswak. Then he put himself, the Maswak in its place. He used little water during Wudu. He did Wudu twice a day, once at Fajar Prayer time and secondly before Maghreb Prayer. Then immediately stood for Maghreb Prayer and after Finishing the Prayer he went on roof of Mosque, where he offered 6 Rakats Nafal Prayer and then becomes busy for reciting the Darood Sharif and other Wazaaif until the time comes for Eisha Prayer. After Eisha Prayer he becomes busy for preparing the food for guests and then gets free around 12 at night and then went for sleep. Every day he as same schedule and routine and he did this till the end of his life.
He had very keen interest for building mosques and always considered this as preaching duty. Six mosques were built up by him, and he worked as labor in construction of those mosques.
Other than this he also did publication of some religious books and gave benefits to public.
He died at the age of 65 in 20-August-1928 (3-Rabi-ul-Awal -1347 H). According to his instructions he was buried in Dohran Wala graveyard (also called graveyard Mian Sahib). Where his tomb is open for every visitor.

Posted by Eworks Professional at 5:06 PM